If you, as a public intellectual, were selected as the object of unwarranted and unprovoked attacks, how would you respond?  How do we, as scholar-activists, navigate through a climate driven by extreme ideology rather than open debate and discussion of evidence, findings, and goals?  Come and join the discussion at the Annual Meeting!

Session 91: Demonology as Propaganda: Frances Fox Piven, the Tea Party, and the Role of Intellectuals

Open Letter from the SSSP to News Corporation

For the past year, Glenn Beck has made Dr. Frances Fox Piven, a respected scholar, public intellectual, and former president of the Society for the Study of Social Problems (SSSP) and the American Sociological Association (ASA), the object of unwarranted and unprovoked attacks, in which he has mischaracterized her work, and that of her late husband, Richard Cloward, and which have caused her to receive death threats from individuals who give currency to Mr. Beck's baseless accusations. We urge News Corporation to ask Mr. Beck to refrain from a form of demagoguery that not only undermines the free and honest exchange of ideas, but that also threatens Professor Piven's safety. 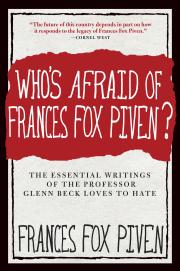 This type of behavior by Mr. Beck, while not new, is especially troubling in the wake of the tragic shootings in Tucson, AZ, where a nine-year-old child and five other individuals were murdered and thirteen others wounded, including a member of the House of Representatives. While the rest of the nation is engaged in a conversation to reduce the violent rhetoric which Mr. Beck's attacks engender, Mr. Beck continues on the attack and even mocks threats made on Dr. Piven's life and other attacks posted on the internet and sent to her via e-mail.

No one invites or enjoys spirited debate more than Dr. Piven, but the debate must be honest and responsible, and free from personal attacks, that when launched are typically an indicator that an individual does not have a valid argument; something Mr. Beck lacks in this case. But even if he had a valid argument, the manner in which he is making it should be unacceptable in any free society, let alone by a network that claims to be "fair and balanced." For once, we urge Fox News to live up to its motto. 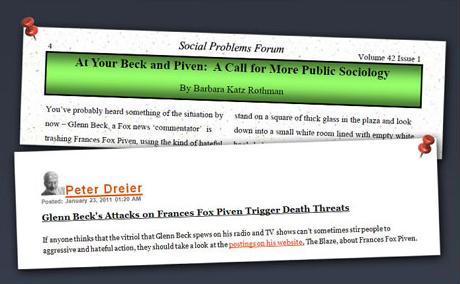