About SSSP : Action and Activism

In Pursuit of Social Justice

As an interdisciplinary community of scholars, practitioners, advocates, and students interested in the application of critical, scientific, and humanistic perspectives to the study of vital social problems, the SSSP is engaged in multiple avenues of social justice research and action. In addition to SSSP publications, the Society regularly participates in calls to action on various social justice issues. Each year, the SSSP also presents the Thomas C. Hood Social Action Award, which recognizes social justice work of grassroots organizations in marginilized communities in the city/local are hosting the annual meeting. See below for more information on these activities.

At the 2019 Annual Meeting, one of our sessions, CRITICAL DIALOGUE: Presidential Perspectives on Current Social Problems, featured the Presidents of several scholarly organizations.  The panelists discussed major social problems. 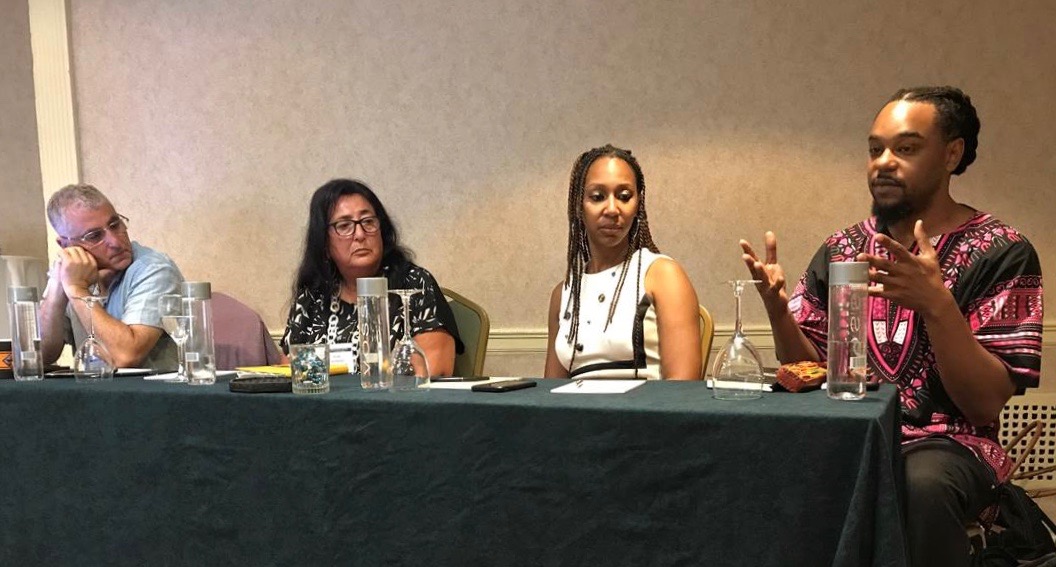 Resolutions were solicited via several calls sent out to the membership by the SSSP Administrative Office as well as by emails sent to the Chairs of the 22 Divisions by the SSSP Vice-President, William D. Cabin. This year, four proposed resolutions were submitted, including the expression of gratitude.

The resolutions were provided both online prior to the meeting and in hardcopy format at the annual meeting for the membership to review prior to the annual business meeting.

In an annual meeting of the Council of Division Chairs, the proposed resolutions were reviewed and some minor edits were made.

The revised resolutions were then reviewed and voted on at the annual business meeting of the SSSP, held on Saturday, August 10, 2019.

If a passed resolution requires letters or e-mails to be sent, the Administrative Office distributes these to appropriate individuals or agencies.

Board Resolution in Honor of Representative John R. Lewis

On July 17, 2020, the Honorable John R. Lewis, a giant of civil rights and social justice in the United States, died. The same day, another civil rights icon, the Reverend C.T. Vivian, passed as well. Three months earlier we lost the Reverend Joseph Lowery, one of the founders of the Southern Christian Leadership Conference (SCLC), its President for twenty years, and considered by many the Dean of the Civil Rights Movement. At a time that the country is deeply divided racially, their passing should remind us that racial and other forms of social justice do not come easily – they require work, dedication, and sacrifice.

The Board moved quickly to adopt a statement in the form of a resolution on these civil rights activists’ passing, that included a provision urging the Society and its members to re-dedicate themselves to these struggles, as an organization and as individuals in our own communities and institutions. We need to do what we can to ensure that their work and sacrifices, and that of so many other activists and protesters, including Black Lives Matter and other activists today, is not in vain. We urge you to recommit yourselves politically to the struggle for civil rights and social justice, to which John Lewis, C.T. Vivian, and Joseph Lowery dedicated their lives.

On behalf of the Board, we have sent letters (and a copy of the resolution) to the President of the United States and Congressional leaders, urging them to expand voter rights, to enact criminal justice system reforms, to assist states with federal funds to ensure fair and safe elections in November, to rename the Edmund Pettus Bridge the John R. Lewis Bridge, and to replace the statue of Alexander Hamilton Stephens in the Capitol with one of John R. Lewis. We have sent letters to John Lewis’s staff in Atlanta and Washington, D.C. expressing our condolences (and asking them to convey our condolences to his family) and to the Governor of Alabama and legislative leaders in the state urging them to rename the Pettus bridge the John R. Lewis Bridge.

To read a copy of the Board Resolution in honor of Representative John R. Lewis click here.

To read the letter to President of the United States and Congressional Leaders click here.

To read the letter to the  Governor of Alabama and Alabama Legislature click here.

The Thomas C. Hood Social Action Award, established in 1991, is awarded to a local grassroots social justice organization in the Standard Metropolitan Statistical Area (as defined by the U.S. Bureau of Census) in which the annual meeting is held that year.  While the recipient can be an organization that engages in direct service work, preferred recipients for the Social Action Award will be organizations that also work at the level of systems change.  The organization may not be a local or regional chapter of a national or international organization, and must be one that will benefit significantly from the award.  The nomination of organizations that include directly impacted people and communities in leadership positions and decisions are also encouraged.  The award carries a stipend of $5,000.